A downloadable tape for Windows 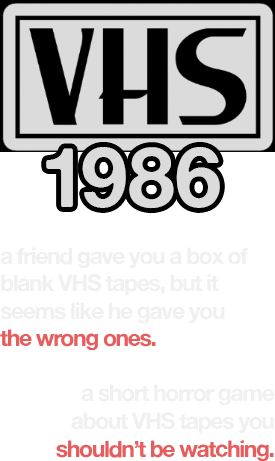 Damnit, I couldn´t figure out 2 of the symbols and that you have to select clock-wise :/ Why is there even a CCW-option...

Also really expected that guy to appear in that corner, welp

I can't figure out the puzzle, also can't brute force it >w< Alsooo can't figure out how to close it without task manager ;3; so that's a thing too-
Edit: Watched a video to find the solution, i did that and it didn't work :/ i was going cw and everything... I also got every phone call one after another, didn't realize that wasn't supposed to happen

Wow... just.... wow. This was really good!! I found it extremely immersive, and I loved absolutely everything about the visuals. The sound design (background + button sounds) were super eerie too :)

I really liked the experience, and highly recommend anyone who hasn't played this yet to go and play it (^w^)

Easily one of the best games i played at itchio.A great puzzle,very nice game.

This game really gets the brain working! I love this graphical style! I also love the atmosphere, OST, and how it still managed to creep me out despite not having jumpscares!

Although I cannot say the game was scary per-se, but it was definitely very atmospheric, and I really loved the graphics! I made a video on it as well.

what are the songs named in this game? I love the music so I was wondering if you can tell me the names of the music. Please and thank you.

music was made by viktor kraus for the game! here's a playlist on youtube

Very cool game! I played it for my Bloodcurdling Barrage in which I post a video each day of October with me playing a horror game. I hadn't played anything like this before and I really enjoyed it.

Very strange game. I liked it. Kept me thinking.

I try to download it but it say my computer maybe at risk. Is it safe to download.

A lot of less popular games on itch say that, its fine

Where can I use the password in the QR code..?

This was so good! Added to my jump scare free game list

Oh its public, i usually link to it around Halloween. Here you go

Awesome! I'm tired of trying out horror games only to find out they're full of jumpscares.

I run a jump scare free horror channel and this list has been quite the boon, friend. Thanks for putting it together.

oh very cool! I'll have to check out your channel

I'm about to begin my annual event in which I post new videos for every day of October so feel free to come take a look.

Thank you!! I avoid using jump scares as much as possible so it's nice to see it's appreciated :)

You're welcome! I also do not like big sudden jump scares, i like slow burn creepy stuff. If you have any game suggestions for the list please let me know!

A very interesting setting, the puzzle took me a bit of luck to figure out though.

another amazing game! keep up the hard work :)

Enjoyed this quite a bit, had some good scares without using jumpscares. Just one question, what's the meaning of the QR code? It was cool to include that, but I'm not very good at figuring this kind of stuff out.

Still, I enjoyed it a lot.

The QR code mystery has been solved by now so I can explain it a bit. It's part of a "bigger mystery" that ties into other games submitted in the jam. So it isn't directly related to this game. You didn't hear that from me! ;)

I liked the idea behind this game!  You did a really good job making this game!

It’s a cool little puzzle. Didn’t take me too long to complete but enjoyed the time I spent with it. Would love to see the concept expanded on.

Awesome game, for me it's easy to like a VHS based game because i'm a movie collector but this game was also just fun !
(i give a more elaborate opinion after the gameplay at the end of the video)

This game is insanely cool, but confused me so much at the end! I loved this though, the style and gameplay elements felt very solid and unique.

A big thank you for letting me play this game and show it on my channel for others to see. I enjoyed playing this and how unique it is in its style. I hope to see more from you as a creator, even using this style again just with some added things. keep it up.

two questions: where was the dollar sign in video 3? why does it matter whether i go clockwise instead of counterclockwise?

The tape was filmed in front of shops where you buy stuff, also they were talking about the sales of cigarettes or something. And because that's just how clocks work. I got stuck on both of these too but it makes sense in the end.

Pros and cons are down below) Check out the game here:

1. I like how you created this VHS feeling while watching the footage.Very well done!

2. I like the sense of suspense. You know that something is wrong but just can't tell what until the very end.

3. I also like the depth of the room, nicely done!

1. I would really love to see a spook at the end. Maybe a person in the hallway that you could barely see from your point of view.

2. Maybe it would be nice to change phone mechanics. Player can unintentionally hang up just by clicking the phone. I did it but I clicked thinking that this would continue the dialogue.

Enjoyed the game quite a lot. For me something was missing though. Couldn't keep my attention at the vids. It would be nice to see a bit more action or mystery. For me it's 4/5. Still, I see that the game has lots of potential.

Hope the feedback was useful!

Hi, this is the best game I play in a long time... Look my gameplay in Spanish and share if you like.

My second round of playing games for the Haunted PS1 Wretched weekend and I started with this one. This was such an awesome experience. I'm ashamed to admit that it took me way longer than it probably should have to solve the poster code, but that's all on me, this game is amazing.

I enjoyed the dark obscurity, but the "secret ending" got me wanting more. What secrets are you holding?!?!

Interesting game, very unique... And there are two endings, apparently haha... The second one is very funny :)

Very cool. Took me a bit to figure out but I sort of got there :)

Help from PedroStormrage in r/ARG:
Oh, good job! If you concatenate the last two codes superimposing the matching characters (U2VnYV9TYXR1cm4=) and then decode it using base 64, you get Sega_Saturn (which was the only I could think of after seeing "Sega_S" being the meaning of the second code)! I'm still not sure how that's meaningful, though.

I also tried to concatenate the first code (nL3dpa2kvU2) to the others in the same fashion (nL3dpa2kvU2VnYV9TYXR1cm4=), but didn't get anything meaningful out of it.

If you remove the first n from nL3dpa2kvU2VnYV9TYXR1cm4=, you get /wiki/Sega_Saturn.

Alright, I found this

in Smalls Island Woes, but those letters do nothing in imgur.

There's also one from A Structure of Unknown Origin at Little Pine State Park: aWtpcGVkaW
, which is ikipedi in Base64.

So maybe it's https://en.wikipedia.org/wiki/Sega_Saturn, but I haven't found a code that for sure says it's the English version. No Players Online's dev apparently hid a real note in the woods in Belgium. Gonna keep looking.

hey! i got in contact with the Smalls Island Woes devs and they said the imgur link IS still functioning, although i havent been able to find a way to make it work myself lol. hope this helps:

Is this already solved? I'm currently trying every possible B V D and P in that sequence since that dude's so hard to hear. Just wondering if I'm wasting my time

not to my knowledge. i tried again today but i only tried the 32 variations accounting for B/P and M/N mixups

I just got it finally https://imgur.com/a/UbnhBPK

Nice, I was trying UblhBBK!

I made a tierlist for a lot of the haunted ps1 games and this game was in it! Please check out my video!

Hi, I'm currently making a series where I play through every game submitted to the Wretched Weekend Jam, and yours was the 3rd game I played!

I absolutely LOVED this game. The art style, the angle of the room and the way it moves, the story, the VHS's and THE MUSIC! 10/10.

I even loved the puzzle, and I was so happy when I solved it! This has been top of the list of best games from this jam for me, excellent work!

Here's the video for those interested (time stamps in description):